Five Scottish rugby stars are backing the work of an Angus community rugby trust by agreeing to become ambassadors for it.

Since June last year it has been working to increase public participation in sport, particularly rugby union and rugby league, in the Forfar, Kirriemuir and Brechin areas to benefit their health and wellbeing. Already it’s created a Friday afternoon term-time Rugby Academy for senior school pupils and walking rugby for those no longer able to play the game at the usual pace.

Now its work will be promoted and aided by the Forfar-raised Fagerson brothers and Murray as well as Sam and Suzie, who also have Angus roots. It’s planned they’ll share the trust’s posts on social media and drop in on training sessions when they can as well as spreading the word about the trust’s work.

They each have their own reasons for agreeing to take on the role. 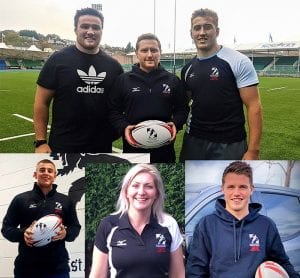 Matt Fagerson said: “I’m so happy to be an ambassador for the Strathmore Rugby Club Community Trust because it was my local club growing up and the people there have been kind to me through the years – helping with gym and training when I’m home.

“The inclusive nature of the projects is fantastic. They’re for such a great cause and I’m sure will benefit many in the area massively.”

Zander Fagerson, explained: “I’m delighted to be an ambassador for the trust because it’s making rugby accessible and fun for all. Being from the local area, I understand there’s not a lot to do recreationally for children and especially for ones who need additional support or guidance. The trust is fantastic because it will grow the game of rugby in Angus further and make it fun for all.”

Sam Grove-White added: “I’m really pleased to be an Ambassador for the trust because it’s a great opportunity to help develop young people involved in the game close to home and give back to the local community.

“Rugby has taught me some excellent life lessons and values, many of which are off-field, which would be great to share with all involved within the community trust.”

Suzi Newton said: “I’m happy to be an ambassador for the Strathmore Rugby Club Community Trust because my present role and past career give me a great understanding of the development of people through rugby in terms of health, fitness and community bonding. It’s great to see the trust doing this so well.”

Murray Mitchell, who recently received his first full Scotland Rugby League cap, came up through the Strathmore Sharks youth section and was playing his senior rugby union with Strathmore until until moving to Aberdeen Grammar Rugby two seasons ago. He continues to play for Strathmore Silverbacks.

He said: “Having played at Strathmore since the age of seven, I’ve seen rugby within the community change in a massively positive way. I’ve always enjoyed the camaraderie around the game and its ethos. The game has really developed me both on and off the field. The work of the community trust really underlines the value of developing people through rugby, which is why I’m delighted to support it.”

Trust Community Project Co-ordinator Josh Gabriel-Clarke said: “We’re naturally chuffed five local, but high-profile, figures in their respective roles across the game have agreed to be ambassadors for the trust and its work. None hesitated when they were asked as they’re all keen to give something back to the local community in which they grew up.

“Our new ambassadors share the same sense of values as the trust and are wonderful examples of what you can achieve through rugby. Most importantly, they’re great people. I’m really looking forward to working with Sam, Suzi, Matt, Zander and Murray.”

To find out more about the Strathmore Rugby Club Community Trust, its work and how you can take part, go to its Facebook page.