Angus Rugby Academy ahead of target in 2nd season

The rugby academy founded by an Angus sports charity is well on its way to beating its target jump in participation for its second season with just four months gone.

The academy, run by The Strathmore Rugby Club Community Trust at Strathmore RFC’s ground in Forfar, has run free sessions for male and female Angus S1-S6 pupils 2-4pm on Friday afternoons during the school term since August 2017.

First season an average of 30 children from the Forfar, Kirriemuir and Brechin areas took part. This season that’s up 53% by last month – ahead of the 40-average target for the year.

The objective of the rugby academy is not just to develop their playing skills but also to provide them with the tactical and conditioning knowledge to successfully transition into adult rugby as well as develop them as individuals.

In addition to standard rugby union and rugby league training, including strength and conditioning work, this season they’ve taken part in a cooking workshop (attended by Gordon Cairns, a director of Rugby Academy sponsor Stracathro Estates) and enjoyed a communication / teamwork workshop with Graeme Skea and field trips to an assault course and Murrayfield.

Speaking about the major uptick in the numbers taking advantage of the scheme from Forfar Academy, Webster High School and Brechin High School, Stuart Gray, Chair of the trust’s Board of Trustees, praised the role of its full-time Community Project Co-ordinator Josh Gabriel-Clarke, who was appointed last July. Stuart said: “Josh very quickly and professionally delivered real purpose and improvements to the rugby academy. 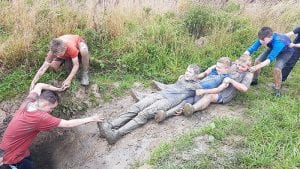 “I’d also like to thank Stracathro Estates for its generous sponsorship of this trust initiative.”

Josh said: “I’m delighted to see the enjoyment the kids are getting from Rugby Academy, alongside its continued growth and the development of all the pupils that have attended the sessions.

“We’ve made a real point of trying to ensure we offer a diverse experience for everyone – whether that’s been through rugby, workshops with external professionals or field trips.

“We’re focussing on developing the person, not just the player. We want pupils to start to develop a wider understanding of the benefits of rugby – whether it be around physical development, values of the game or the importance of team dynamics. But ultimately we want them to have fun.”

Gordon Cairns, Director of Stracathro Estates, said: “We are delighted to be associated with The Strathmore Rugby Club Community Trust because ‘developing people through rugby’ describes its work well. We are very impressed with the idea of developing youth through sport – an excellent initiative which motivates youngsters to take charge of their life and be proud of who they are.

“Stracathro Estates is pleased to offer continued financial support to the Rugby Academy and note its considerable achievements over the last year. We wish the trust continued success.”

It’s based at Strathmore Rugby Club in Forfar and works in partnership with Strathmore RFC, Brechin RFC, the Scottish Rugby Union and the Scotland Rugby League. Its vision is that by June 2019 it will have created a sustainable programme of projects centred on rugby, health and the community. Last month it appointed a full-time Community Project Co-ordinator to fund, develop and run its projects.

For details go to the trust’s Facebook page at www.facebook.com/TSRCCT

PrevPreviousAngus to get a new Clan!
NextAngus sports charity brings autism-friendly rugby to ScotlandNext
Back to News