An Angus sports charity has taken a step closer to its vision of a sustainable programme of projects centred on rugby, health and the community by appointing a full-time Community Project Co-ordinator to fund, develop and run them.

Josh Gabriel-Clarke (32) has been appointed into the newly-created role by The Strathmore Rugby Club Community Trust and will start on July 2.

It’s based at Strathmore Rugby Club in Forfar and works in partnership with Strathmore RFC, Brechin RFC, the Scottish Rugby Union and the Scottish Rugby League. Its vision is that by June 2019 it will have created a sustainable programme of projects centred on rugby, health and the community. Last year they began with the creation of a Rugby Academy for secondary age pupils which has run weekly sessions during termtime attended by 30 children. 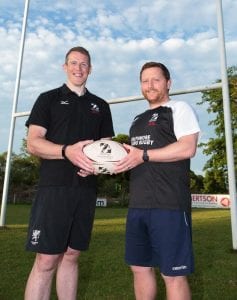 Josh’s appointment is the next step along the road and has been enabled by funding from the Forfar Common Good Fund, Sport Scotland and The Robertson Trust. His remit is to develop the Rugby Academy further as well as establish Walking Rugby and Inclusive Rugby for those with mobility and other disability issues. As well as developing more players, the trust aims to channel more people of all ages into coaching and refereeing.

Josh comes to the role with a strong background as a strength and conditioning coach for the Scottish Rugby Union, Sale Sharks and Leicestershire County Cricket Club before moving into rugby development roles at Leisure & Culture Dundee and starting his own strength & conditioning consultancy in 2015

Speaking about Josh’s appointment, Stuart Gray, Chair of the trust’s Board of Trustees, said: “We’re delighted to be able to appoint someone with such a great track record in rugby and see the trust reach another milestone in its development.

“To do so within 10 months of the charity being founded is a credit to the trustees and shows the quality and importance of the work we’re doing. Thanks to the Forfar Common Good Fund, Sport Scotland and Robertson Trust for their support.”

Josh said: “I’m very pleased to take on this role and look forward to taking the projects forward toward achieving the trust’s 2019 Vision.”

Fundraising for the trust’s projects is ongoing, with the latest initiative a Dinner on June 9 featuring speakers Gary Robertson, the Dundee Street Poet, Colin Robertson, Scottish Rugby’s age-grade Coach and chaired by Peter Mitchell, one of Scotland’s top after-dinner speakers. Tickets can be bought by contacting Trust officials via its Facebook page.

For more about the trust and how to get involved, go to its Facebook page at facebook.com/TSRCCT, LinkedIn page at The Strathmore Rugby Community Trust.