An Angus sports charity has introduced autism-friendly rugby sessions for primary school pupils to Scotland to help them and their parents.

The Strathmore Rugby Club Community Trust, based in Forfar, is holding the new free weekly sessions for Angus Primary 1-7 pupils each Friday.

They involve activities including a ‘Rugby Ready’ warm-up – fun tag/touch-based rugby games plus sensory activities including proprioceptive input – to create sensations from joints, muscles and connective tissues that underlie body awareness – obtained by lifting, pushing and pulling heavy objects, including your own weight.

The sessions are designed to create a positive learning environment for children with or undergoing diagnosis for Autism Spectrum Disorder (ASD) and their siblings to have fun while developing confidence and social skills as well as general physical literacy and sporting skills. They also provide respite and social contact for parents and carers – who can socialise and enjoy refreshments on-site as well as watch with the knowledge their child is in a safe environment.

The weekly training, planned to be held on Fridays 5-6pm plus Sundays 2-3pm based on demand, includes a range of features to take into account the specialised needs of children with ASD. 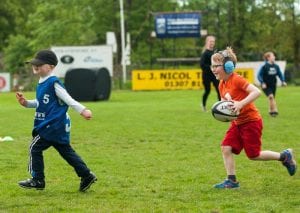 Other steps taken to make the sessions autism-friendly, include:

Josh Gabriel-Clarke has a personal reason for suggesting the sessions to add to the secondary pupils Rugby Academy, walking rugby and unified rugby (for disabled adults) initiatives the trust has created in its first two years.

“My son Archie, who is six, was diagnosed with autism and Sensory Processing Difficulties (SPD) aged three. As a parent of a child with Autism Spectrum Disorder (ASD) and being engaged with the additional needs community, I recognised there’s a demand but a distinct lack of activities in the area for children with additional needs such as ASD and SPD.

“We hope these sessions will give children with ASD a positive learning environment to help them flourish while also supporting their parents and siblings.”

“They’re actually playing with other children and autistic children find that very difficult. Instead, they’re engaging and loving it. They’re enjoying the structure of it and that they’re with other children like them. It’s exciting for them – they can let off steam on a Friday night and completely have fun.

“For me, I get to come down and have a cuppa with some other mums while the kids can play with other kids. It’s hard having autistic children – you feel lonely. I most enjoy that my children are coming here and having fun.”

To help fund the trust’s work, a fundraising dinner is being held at the Strathmore RFC Clubhouse on June 1. Speakers include noted teacher and rugby coach Bruce Aitchison, famous for his Egg Shaped Planet social media, coaching and motivational speaking. Tickets are £45pp for a three-course meal. A raffle will also be held

The Strathmore Rugby Club Community Trust was founded in 2017 to increase public participation in sport, particularly rugby union and rugby league, in the Forfar, Kirriemuir and Brechin areas to benefit community health and wellbeing as well as develop young people into healthy, positive members of the community through the positive ethos and values of rugby.

It’s based at Strathmore Rugby Club in Forfar and works in partnership with Strathmore RFC, Brechin RFC, Scottish Rugby and the Scotland Rugby League. Its vision is that by next month it will have created a sustainable programme of projects centred on rugby, health and the community.

For details and dinner tickets go to the trust’s Facebook page at facebook.com/TSRCCT or email trust.bdc17@gmail.com .

Get Into Summer Programme – Free Activities