Angus to get a new Clan!

Angus is to get a new Clan early next year. But instead of wearing its own-design tartan kilts and ties, it will feature red scrum caps.

The ‘Strathmore Clan’ will be created by Strathmore Rugby Club Community Trust in partnership with Trust Rugby International (tri) early next year as part of its mission to make rugby, and the health and wellbeing benefits which arise from it, available to everyone in the community.

The ‘clan’ will be a Unified Rugby team featuring up to five adult players with disabilities per team, who play wearing red scrum caps alongside able-bodied players who support them on the field.

Unified Rugby, pioneered by tri, is used across Scotland to provide people with disabilities the opportunity to build confidence and social skills by engaging in a controlled game of contact rugby against other teams, while also accommodating their individual needs. Anyone can play as long as they can walk unaided without the use of a walking stick.

The ‘Strathmore Clan’ will include people from all over the Strathmore Valley and is already being supported by Montrose & District RFC, Brechin RFC and Strathmore RFC. 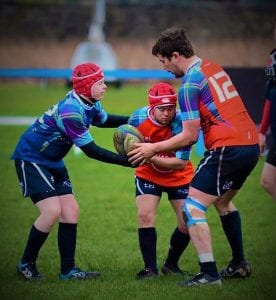 The first competitive unified rugby game in Angus will take place at Inchmacoble Park in Forfar on Saturday March 17 next year between a Strathmore XV and the Caledonia Clan, hours before the Calcutta Cup game. A training day was held on November 17 to trial the idea and was great success.

This is the second inclusivity rugby project the trust has launched – previously launching walking rugby for elderly people in West Angus.

Trust Community Project Co-ordinator Josh Gabriel-Clarke says: “We’re very excited to be announcing this project with tri as we aim to provide opportunities for everyone, regardless of age or ability, to partake in rugby and enjoy the wider benefits it brings”.

Jamie Armstrong, Founder of tri, says: “When we started tri Unified Rugby in June 2012 as a taster project with NHS Ayrshire and Arran, we never envisaged working nationally. Now within 6 years we have planted the seed of opportunity to grow unified rugby across Scotland.

“It is inspiring to us that Strathmore is the latest club to pick up the unified rugby ball and run with it and we’re looking forward to working with the Strathmore Clan and building them in to our national player development pathway.”