Strathmore Community Rugby Trust is enjoying a second high-profile recognition of its work promoting community health and wellbeing through rugby just days after HRH The Earl of Forfar became its Royal Patron. 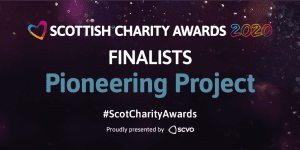 Last week, on August 3, The Strathmore Community Rugby Trust (SCRT) announced that His Royal Highness the Earl of Forfar (Prince Edward) had become its Royal Patron. Today, just 11 days later, it’s being announced as a Finalist in two categories of Scottish Charity Awards (SCA), run annually by the Scottish Council for Voluntary Organisations (SCVO) to celebrate the best of Scotland’s voluntary sector. It’s the only Angus Finalist.

The Trust recently got the great news it is a Finalist for the Pioneering Project award for bringing Autism-Friendly Rugby for primary pupils to Scotland last year. That will be decided by a judging panel and announced on September 25 in a virtual awards ceremony.

As a result of being a Finalist in that, the Trust is also a Finalist in the People’s Choice Award, voted for by the public. So it’s challenging the people of Angus to not just vote for it but also ‘Pass It On’ by posting a short video on social media saying they’ve done so and nominating five pals to do the same by the September 4 voting deadline.

This year’s Scottish Charity Awards shortlist includes 45 individuals and organisations from charities and voluntary groups across the country. While a judging panel will determine the winners under eight categories, members of the public can have their say by voting for their favourite overall entry in the People’s Choice Award – by visiting scvo.org.uk/vote – before 5pm on Friday 4 September 2020.

The full list of finalists can be found on the SCA website. Due to the impact of Covid-19, this year the awards will run a little differently. Winners will be announced on 25 September (rescheduled from June) and will now take place online so all finalists and attendees who wish to attend are still able to join the celebrations in a safe way, regardless of lockdown phase or shielding status.

Anna Fowlie, Chief Executive of SCVO, said: “Much of the work celebrated this year predates the pandemic.  All aspects of our lives have been disrupted in 2020. Our communities and the charities, voluntary groups and social enterprises they rely on have been under enormous pressure. Scotland’s voluntary sector has never been more needed and will be essential to Scotland’s recovery. At SCVO we know that fantastic work is going on all the time and we are delighted to celebrate these achievements and successes through the Scottish Charity Awards.

“This year’s shortlist of 45 finalists showcases just how diverse our voluntary sector is, and highlights the fantastic work that has been going on across the country since the last Awards until March this year. The Awards are a great way of celebrating and recognising the people and organisations who make our voluntary sector a crucial part of every part of life in Scotland. Our finalists are fantastic and I would encourage everyone to support their favourite by voting in the People’s Choice Award.”

The Trust’s autism-friendly rugby for primary children initiative, now sponsored by Shepherd Chartered Surveyors, was introduced to Scotland in May last year. Its sessions create a positive learning environment for children with or undergoing diagnosis for Autism Spectrum Disorder (ASD) and their siblings to have fun while developing confidence and social skills as well as general physical literacy and sporting skills. They also provide respite and social contact for parents and carers.

Speaking about its quickfire double-success, Trust Chair, Stuart Gray, said: “We’re naturally delighted to have the work and support of our volunteers, staff, sponsors and project participants recognised with these award Finals places.

“Here’s hoping the people of Angus can pass on the voting message so well they help us to our first national award!”

Paul Taylor, Partner of trust sponsors Shepherd Chartered Surveyors said: “Shepherds Surveyors are delighted to be the main sponsor for Autism-Friendly Rugby. It corresponds well with our commitment within the Angus community. Autism-Friendly Rugby is a pioneering project which deserves the Royal recognition it is receiving. We look forward to a long term-relationship with the Trust.”

Stewart Harris, Chief Executive, sportscotland said: “This is a fantastic initiative, making sport more accessible by listening to what matters to people and adapting to meet their needs. It is fantastic to see that work being recognised with two award nominations.

“Sport and physical activity contribute to improving the health and wellbeing of our nation, and projects like this one from Strathmore Community Rugby Trust have an important role to play in making that happen. This dedicated team of volunteers are playing their part in removing barriers to participation and as a result, improving their community and the lives of the people who live there.”

To vote for the Trust simply visit https://scvo.scot/scottish-charity-awards/finalists-2020/pioneering-project/autism-friendly-rugby-strathmore-community-rugby-trust and enter your email address.  Thank you!

PrevPreviousHRH Earl of Forfar becomes our Royal Patron
NextWe Need Your Votes!Next
Back to News