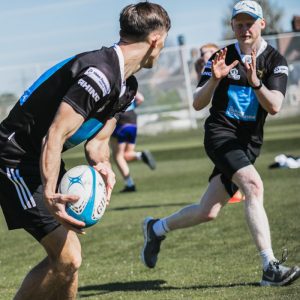 Strathmore Community Rugby Trust are delighted to offer a new sport for visually impaired adults in Tayside, giving them the chance to improve their physical and mental wellbeing through specially-modified weekly rugby sessions.

The Trust is adding visually impaired rugby to the list of projects it already runs, including rugby and life lessons for High School pupils, walking rugby and our award-winning Autism-Friendly Rugby for primary pupils.

The sessions will be held every Sunday at Forfar Community Campus (starting on 21 November) from 10.45am till noon and will be open to anyone over the age of 18, regardless of fitness or ability level, whose visual impairment falls between B1 and B5 in the British Blind Sport sight classification system. Details of the classifications can be found at https://britishblindsport.org.uk/educationandresearch/classifications/

The weekly event will aim to provide visually-impaired adults with an opportunity to be more active and improve their physical and mental wellbeing by playing a specially-modified version of the game. The first will be held on Sunday November 21.

Visually-Impaired (VI) Rugby is similar to touch rugby. Played seven-a-side, it uses a ball containing ball bearings and bells to make it audible. Players wear numbered bibs so the referee, who commentates throughout to help them know where the ball is and what’s happening, can identify players on the pitch.

Play takes elements from both the Union and League codes – so features uncontested scrums and line-outs, two-hand touch tackles after which the tackled player places the ball between their legs and the tackling team have to retreat five metres as well as a turnover ball after six tackles.

VI Rugby is already well-established in England and Wales – with teams at Worcester, Swansea and Cardiff – thanks to the work of sports charity The Change Foundation. It’s working with Strathmore Community Rugby Trust to establish the game in Scotland for the first time, alongside the RNIB, North East Sensory Services, Scottish Disability Sport, Guide Dogs and Scottish War Blind.

Financial support for the new project has already been received from Angus Health and Social Care Partnership, The National Lottery Awards for All and the Colin Grant Trust. An extra local sponsor is also being sought. Any businesses interested should contact the Trust.

Community Trust Manager, Maggie Lawrie, said: “We are really excited to be bringing Visually-Impaired Rugby to Scotland. Rugby is such an inclusive sport and VI Rugby is another example of how the game can be made available to the whole community.

“For the Trust, providing this opportunity allows us to continue to fulfil our values of rugby, health and community. We’re really excited to be leading the way this and look forward to seeing where the journey takes us.”

Alex Bassan, Head of Business Development at The Change Foundation said: “We are thrilled to be working with Strathmore Community Rugby Trust to bring VI Rugby to Scotland.

“Our aim is to help change lives through sport and in doing so enable as many people as possible to reap the benefits of sport. I’ve seen first-hand the enjoyment players get from the game and the friendships which are created. It’s also great to see people doing something they never thought would be possible – whether that be enjoying a game they used to play before their sight deteriorated or starting something new.

“If anyone would like to find out more about The Change Foundation or VI Rugby, please don’t hesitate to get in touch.

For more information about the Trust visit our About Us section.