Strathmore Community Rugby Trust has been recognised for its work promoting community health and wellbeing through rugby with a win at the 2020 Scottish Charity Awards. 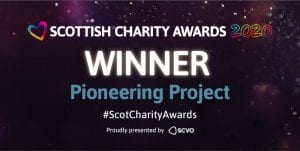 Last month The Trust was named as a Finalist in two categories of Scottish Charity Awards (SCA).  Run annually by the Scottish Council for Voluntary Organisations (SCVO) to celebrate the best of Scotland’s voluntary sector, this year’s awards saw the Trust as the only Angus Finalist.

The winners were announced in a live online event on Friday night (September 25). The Trust was named the winner for the Pioneering Project award for bringing Autism-Friendly Rugby for primary pupils to Scotland. The award was decided by a judging panel.

The Trust’s Autism-Friendly Rugby for primary children initiative, now sponsored by Shepherd Chartered Surveyors, was introduced to Scotland in May last year. Its sessions create a positive learning environment for children with or undergoing diagnosis for Autism Spectrum Disorder (ASD) and their siblings to have fun while developing confidence and social skills as well as general physical literacy and sporting skills. They also provide respite and social contact for parents and carers.

The Trust was also a Finalist in the People’s Choice Award, voted on by 27,719 members of the public. This year’s Scottish Charity Awards shortlist included 45 individuals and organisations from charities and voluntary groups across the country.

Speaking about its first success at the Scottish Charity Awards while accepting the award on behalf of the Trust, Community Project Coordinator Maggie Lawrie, said: “We are absolutely over the moon to have won! We’ve received so much support for the project – not only within our immediate community but also from partner organisations. It’s great that all the hard work which has gone into making Autism-Friendly Rugby a success has now been recognised.

Paul Taylor, Partner of trust sponsors Shepherd Chartered Surveyors said: “As the main sponsor of Autism-Friendly Rugby, Shepherds Surveyors is delighted to see the project and those who deliver it recognised in this way. Autism-Friendly Rugby is a pioneering project which deserves the recognition it is receiving.”

Stewart Harris, Chief Executive, sportscotland said: “It is fantastic to see this initiative to make sport more accessible recognised in these awards. Sport and physical activity contribute to improving the health and wellbeing of our nation, and projects like this one have an important role to play in making that happen.”

The Trust was founded in 2017 to increase public participation in sport, particularly rugby union and rugby league, in the Forfar, Kirriemuir and Brechin areas to benefit community health and wellbeing as well as develop young people into healthy, positive members of the community through the positive ethos and values of rugby.